San Francisco is growing as our neighborhoods, values, and economy continue to draw new residents. As of 2017 the population was 884,363, up 14% from 2000. Plan Bay Area, developed by the Association of Bay Area Governments, projects San Francisco will grow by 90,000 housing units and 190,000 jobs by 2040. As the city’s density increases, having sufficient infrastructure to support all residents in all neighborhoods becomes more challenging but also more important.

Real estate developments along the waterfront, the creation of new neighborhoods, and preparing existing neighborhoods for anticipated growth will increase the City’s infrastructure portfolio along with its tax base. Central SoMa, the Hub, Mission Bay, Candlestick Point, and Hunters Point Shipyards are just a few of the high-growth areas changing the face of San Francisco. Many of these developments and projects have distinctive funding mechanisms, including dedicated development fees and developer agreements that target improvements in areas of especially high growth. These projects seek to create well-planned, safe places to live, travel, work, and play. 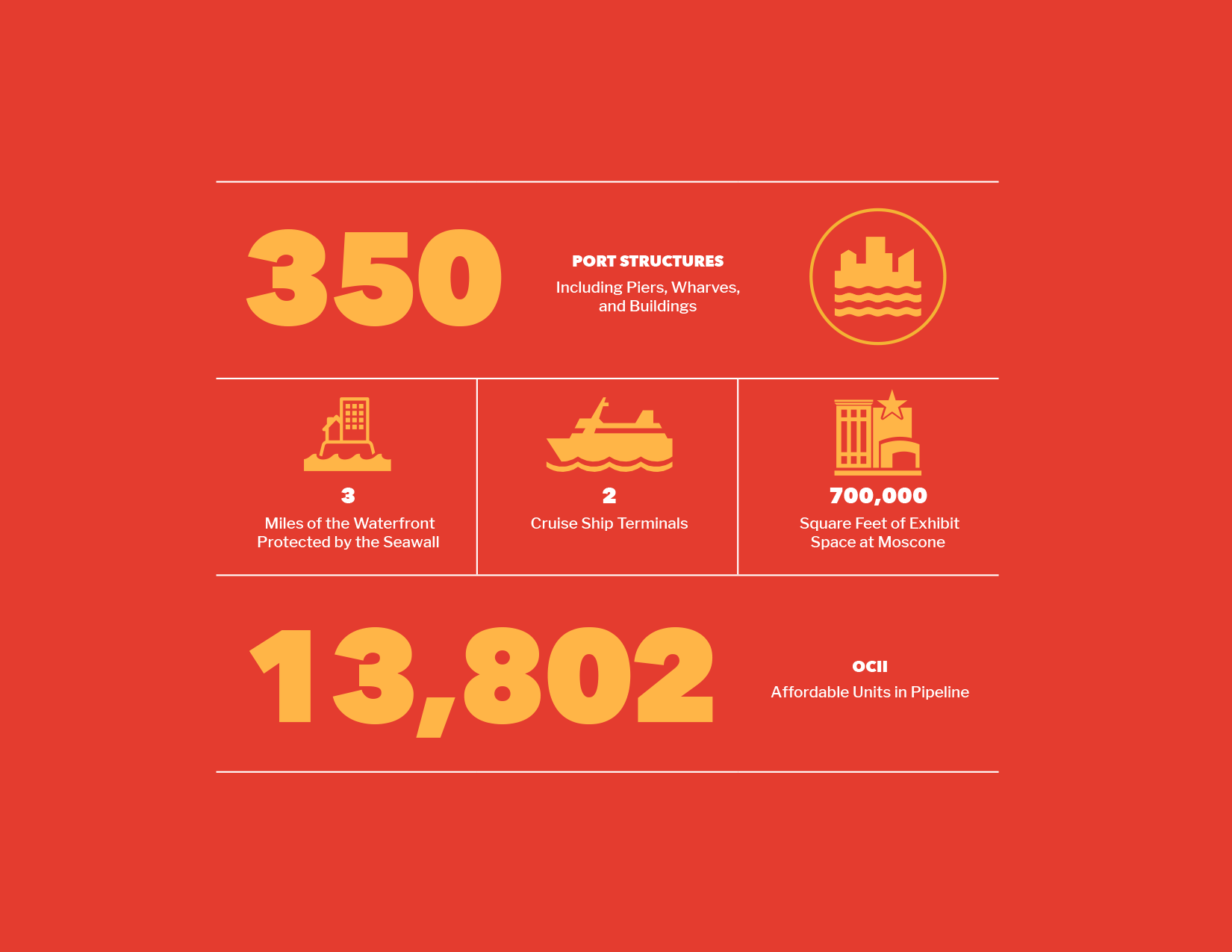 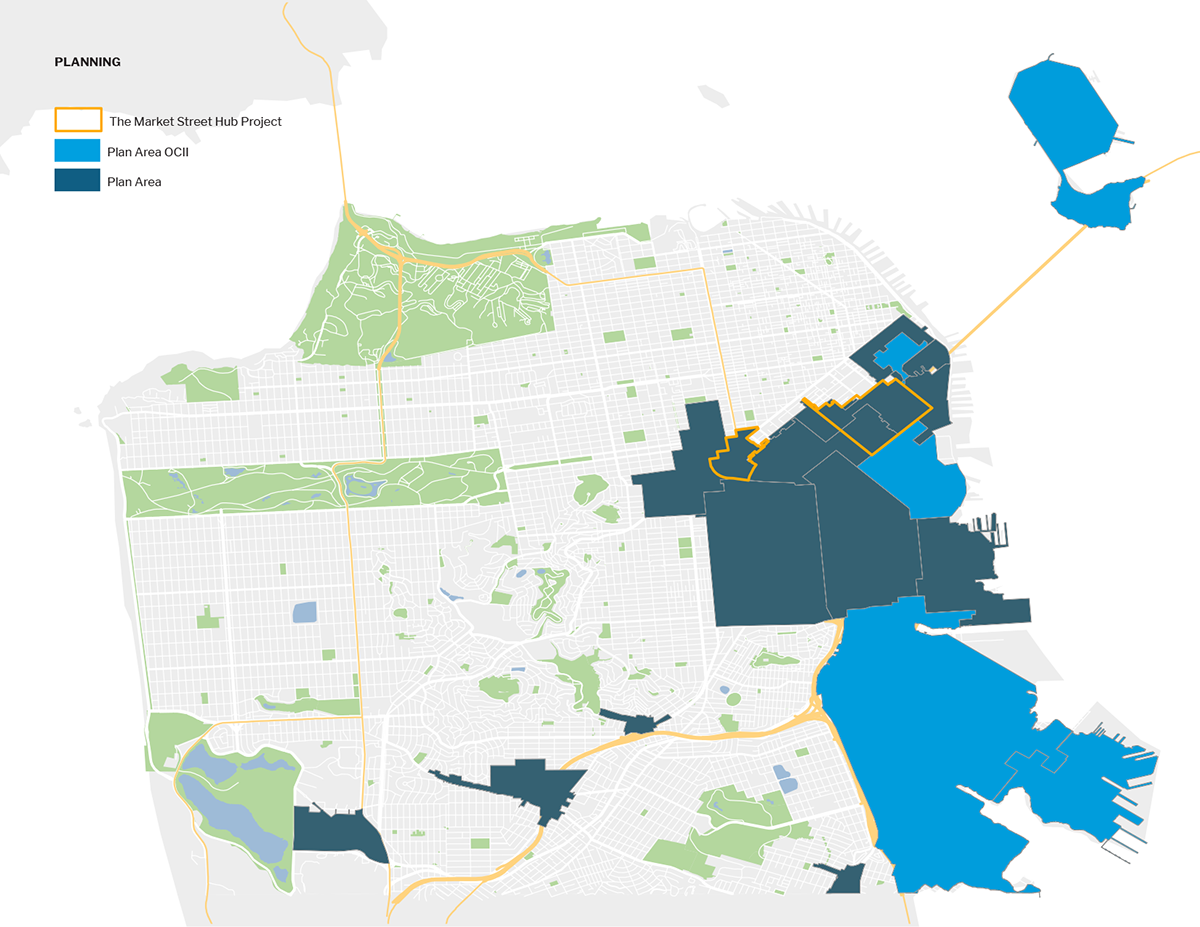 This chapter includes capital projects from departments, agencies, and programs whose primary objectives are to improve San Francisco’s wide-ranging economic base and plan for its future growth.

The Port of San Francisco is responsible for the 7.5 miles of San Francisco waterfront adjacent to San Francisco Bay. The Port manages, maintains, develops, markets, and leases all of the property in this area. The Port’s operating portfolio is composed of approximately 580 ground, commercial, retail, office, industrial, and maritime leases, including leases of many internationally recognized landmarks such as Fisherman’s Wharf, Pier 39, the Ferry Building, and AT&T Park, home of the San Francisco Giants baseball team.

Port lands must be used consistently with public trust principles for the benefit of all California citizens, to further navigation and maritime commerce, fisheries, public access and recreation, environmental restoration, and commercial activities that attract the public to the waterfront. Urban waterfront developments, including the new Southern Bayfront neighborhood developments proposed in the Mission Rock, Orton, and Forest City projects, require detailed coordination, review, and approval of many government agencies. The Port has also secured State legislation to allow non-trust uses of specified Port lands and created special financing districts to support waterfront improvements. Such advances were made possible by developing a common understanding with partner agencies of project objectives and requirements to restore historic structures and improve the waterfront for maritime and public use and enjoyment.

The San Francisco Planning Department helps to create a built environment that supports our own growth by providing guidance on land use and zoning policy, urban design, public realm enhancements, and environmental planning. As San Francisco’s economy continues to expand, the City has adopted specific Area Plans to channel new development and to provide a framework for adding housing and jobs that move San Francisco forward. These Plan Areas are Balboa Park, Eastern Neighborhoods, Market Octavia, Rincon Hill, Transit Center, and Visitacion Valley. The City recently adopted a new area plan for Central SoMa and is developing another for the Hub. New infrastructure projects planned in these areas include improvements to transportation networks, streetscape enhancements to create inviting pedestrian corridors, new open spaces, and other quality of life improvements.

The responsibilities of San Francisco’s housing agencies have been evolving in recent years. In 2012 staff from the City and the San Francisco Housing Authority (SFHA), along with representatives of 72 different community organizations, met over a four-month period to re-envision the roles and responsibilities of SFHA. One of the primary goals of that process was addressing the $270 million backlog of deferred maintenance needs in the public housing stock. The resulting strategy addressed critical immediate and long-term rehabilitation needs while preserving affordability and improving conditions for very low-income residents.

As part of this strategy, SFHA set out to convert the majority of its public housing units to private, non-profit-led ownership and management to enable the use of tax credits as a funding source for these properties. SFHA will continue to ensure compliance with eligibility and other programmatic requirements at these sites, but the management of the facilities will no longer be SFHA’s responsibility. It is expected that 4,575 housing units, including those at HOPE SF sites, will be converted through this process, leaving approximately 1,460 public housing units along with partnership interests in HOPE VI sites in the SFHA portfolio. SFHA capital is discussed in Chapter Eight: Health and Human Services.

The mission of MOHCD is to coordinate the City’s housing policy; provide financing for the development, rehabilitation, and purchase of affordable housing in San Francisco; and strengthen the social, physical, and economic infrastructure of San Francisco's low-income neighborhoods and communities in need. MOHCD administers the HOPE SF initiative, and it also manages the funding available through the 2015 Affordable Housing General Obligation Bond and the Housing Trust Fund. Additionally, MOHCD serves as the Successor Housing Agency, responsible for all former San Francisco Redevelopment Agency affordable housing assets.

HOPE SF is an anti-poverty initiative that works to revitalize San Francisco’s largest and most distressed public housing sites as mixed-income developments. This effort calls for a wide variety of capital improvements, beginning with horizontal infrastructure improvements that pave the way for new homes, community facilities, and open spaces. The HOPE SF public housing sites are Hunters View, Alice Griffith, Potrero Terrace and Annex, and Sunnydale and Velasco. All of these projects are former San Francisco Housing Authority sites, now being converted to private management.

San Francisco needs to build more affordable housing in order to keep our communities stable. In 2015 voters approved a $310 million Affordable Housing G.O. Bond. This Plan proposes another for $500 million in November 2019 to address our continuing affordability crisis and the related underlying infrastructure needs. Should additional G.O. Bond Program capacity be identified in time, the Board of Supervisors has resolved unanimously to support the assignment of that increased capacity to the 2019 Affordable Housing Bond.
San Francisco's unaffordability crisis is wide-reaching, and vulnerable populations are especially affected. In particular there is an emerging need of housing stabilization for San Francisco's aging residents due to the fast-growing population of seniors who need a range of affordable housing solutions so that they can continue living in the city they call home.