Addressing the capital needs of the City’s public safety departments is one of the primary challenges of the Capital Plan. As the City works towards a more progressive justice system, there is an obligation to maintain the infrastructure that enables departments to do their jobs safely day in and day out. To ensure the security and well-being of San Francisco’s visitors and residents, including those in custody, the City must devote resources to provide humane and resilient facilities for our public safety agencies. 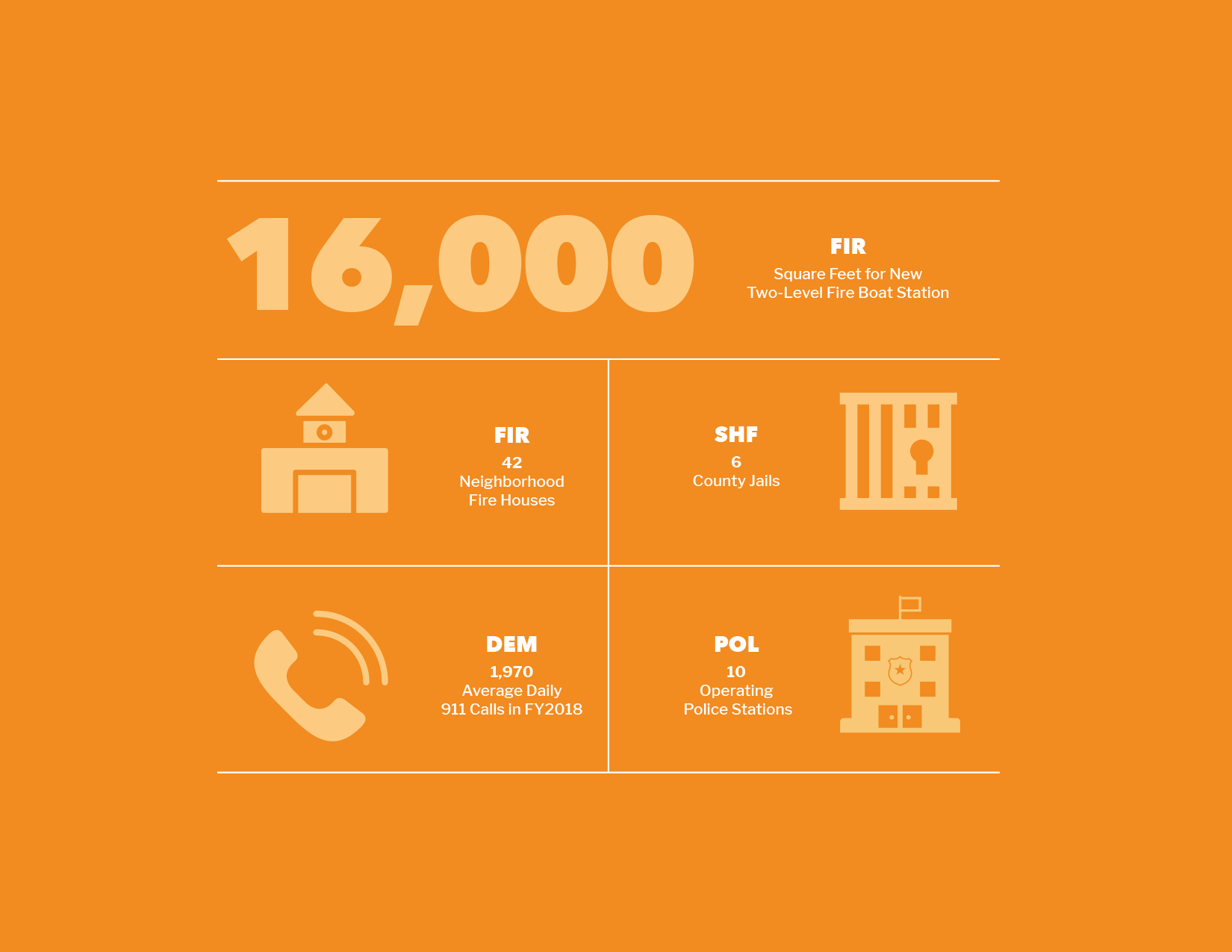 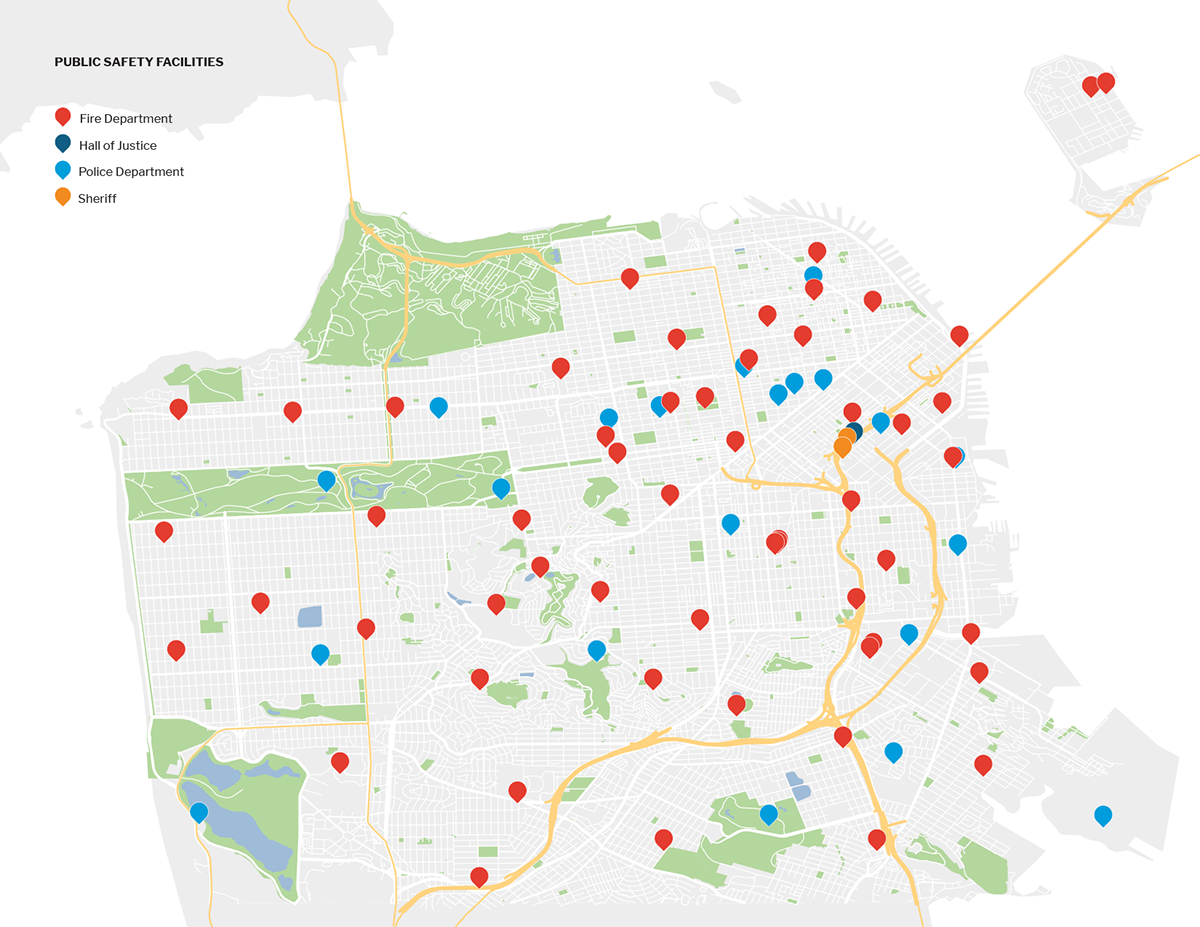 Since 2010, the voters of San Francisco have enthusiastically supported the Earthquake Safety and Emergency Response (ESER) General Obligation Bond Program at the ballot box. That program has provided funding for essential public safety projects large and small, from a new public safety headquarters and crime lab to focused scope projects in neighborhood fire and district police stations. The ESER Program is projected to continue in the Plan, with measures planned for elections in 2020 and 2027. The City
will aim to prioritize projects that address the greatest seismic and other risks in the publicly owned capital portfolio and those most essential for public safety operations. One of the major programs in ESER is the Emergency Firefighting Water System (EFWS), sometimes referred to as the Auxiliary Water Supply System. EFWS is an independent high-pressure water supply system dedicated to fire protection. It was installed in 1913 in response to the Great Earthquake and Fire of 1906 and is owned and operated by the San Francisco Public Utilities Commission. The system consists of core facilities, pipelines, tunnels, and cisterns, which combine to produce the ability to deliver water at extremely high pressures in defense against large multi-alarm fires, specifically those that could occur after a large earthquake when the domestic water system may be impacted.

Future ESER funds will focus on improving EFWS capabilities in the city's western neighborhoods. A 2013 SFPUC  analysis studied how to maximize the likelihood the EFWS would effectively provide the necessary firefighting capabilities after a major earthquake.  In 2018 the SFPUC completed a study analyzing options for high-pressure fire suppression for the Richmond, Seacliff, and Sunset districts. These studies serve as the basis for future EFWS project selection and implementation.

The Justice Facilities Improvement Program (JFIP) was originally developed in 2008 to initiate the closure of the Hall of Justice (the Hall or HOJ) and the construction of replacement spaces for that facility.

The HOJ stands seven stories tall and was originally built in 1958. It contains the County courthouse, office space for various justice-related staff, and two County jails. The jails on its two top floors (County Jails #3 and #4) were built on an antiquated model of corrections with linear jails and limited program space. County Jail #3 is closed, but County Jail #4 remains open, with approximately 350 prisoners in the building 24 hours a day. The linear model of this facility creates limited visibility of prisoners, leaving them vulnerable to assault and self-harm. The County Jail #4 kitchen and laundry and some of the building’s core subsystems support operations at the nearby County Jails #1 and #2. A major earthquake is likely to generate significant damage to the building and render it unusable.

Since the last Capital Plan, the City has taken several significant steps towards the closure of the Hall. To vacate the building as expediently as possible per direction from the City Administrator, staff from the District Attorney, Police, and Adult Probation departments will be relocated to leased space by the end of 2020. Their exit, combined with the recent relocation of the Office of the County Medical Examiner in 2017 and the forthcoming Traffic Company and Forensic Services Division building, both funded by ESER 2014, will leave reduced operations in the building.

Capital investments to end the reliance of the downtown justice campus on the Hall have also begun. The renewal of the County Jail #2 kitchen was funded with General Fund as part of the Capital Budget in FY2019.

The Hall of Justice Exit Projects funded in the Certificates of Participation Program will further advance the JFIP effort. The few remaining City offices in the Hall will be consolidated on the Harriet Street side of the building and acquired properties once obtained. Any remaining dependencies on the Hall jails such as holding required for Courts operations will need to be addressed. The data hub in Room 125 will need to be relocated, which will be a major interdepartmental capital and IT effort; the equipment required for this project is not included within the COPs project. Together with the relocation of prisoners if the jail count is not sufficiently reduced through alternative strategies, these projects should enable the demolition of the Hall's Bryant Street wing.

Demolishing the Bryant Street wing and enclosing the remaining part of the building will leave a regular rectangular structure with better expected seismic performance. The demolition will also create room to begin construction of a replacement Hall of Justice while the Courts remain operational.

The last Capital Plan slated projects for administrative staff and prisoner relocations in the COP Program. With leases now secured for nearly all administrative staff in the short-term, the capital construction projects related to the Hall Exit has been removed from the early years of the COP Program. The COP Program now planned shows a replacement Hall of Justice Consolidation Project in FY2028 instead, envisioned at the downtown campus once the Courts secure State funding.

The full vacation, demolition, and consolidation of the Hall of Justice will not be possible as long as County Jail #4 is open.

Working with input from criminal justice reform advocates through the Re-Envisioning the Jail Work Group convened by then-Board President Breed, the City continues to pursue and fund strategies to reduce the jail population. Co-chaired by the Sheriff, the Director of Public Health, and a leading community advocate, the Work Group prioritized strategies of housing, expansion of community-based and Department of Public Health behavioral health treatment facilities, a reentry navigation center for justice-involved persons, renovations to County Jail #2 to accommodate a portion of the County Jail #4 population, and the creation of an interagency intake and discharge planning center in County Jail #1. The construction of a replacement jail facility for the beds at the Hall was not prioritized by a majority of Work Group members, nor was a centralized Behavioral Health Justice Center. The City has put resources behind the Work Group’s prioritized strategies. Still the jail count remains too high to allow for the permanent closure of County Jail #4.

A solution that will permanently close the Hall of Justice jails is still needed. San Francisco historically has been averse to the construction of new jail facilities. However, given the City’s responsibility for prisoners and staff, it will be necessary to relocate them from the Hall one way or another. The solution may require the construction of a replacement facility and/or operational changes such as out-of-county placements.

Efforts to finally close the Hall once and for all may involve the allocation of General Fund Debt, Capital Planning Fund, and/or General Fund.

San Francisco’s Fire Department currently trains at two facilities, one in the Mission District and one on Treasure Island. With Treasure Island’s development now in progress, the Department will need to relocate from that site as early as 2024. The Mission facility is too small to accommodate the full training operation. The Fire Department has conducted a needs assessment and determined that approximately seven acres would be required to house a state-of-the-art training operation. The City is currently exploring options for a location. Once a location is secured, the City will seek to make the highest and best use of that site. SFFD's programming needs will be scoped first. If it is financially and spatially feasible to address other public safety training needs with an integrated project, the City will pursue that option.

Working in partnership with San Francisco Public Works, these public safety agencies have identified repair and renewal needs to keep their existing facilities in a state of good repair and ensure that each agency’s operational needs are met. They have also identified some sizable gaps between the current portfolio and their projected operational needs in the years ahead. For both SFFD and SFPD, additional stations are needed if the City is to keep pace with the rapidly growing population in the Southeast.