In order for local government to successfully deliver services as San Francisco grows, the City must plan carefully, run our internal functions smoothly, and pay attention to performance across the board. In practice, much of this work falls to the Office of the City Administrator, which oversees the General Services Agency (GSA). Comprised of a broad array of departments, divisions, programs and offices, GSA is committed to increasing San Francisco’s safety and resilience and ensuring the efficacy of government services. Day in and day out, GSA’s operations help the wheels of government to turn.

The General Government Service Area encompasses the capital needs that pertain to the operations of GSA departments; projects delivered for client departments are captured in the Plan’s other Service Areas. 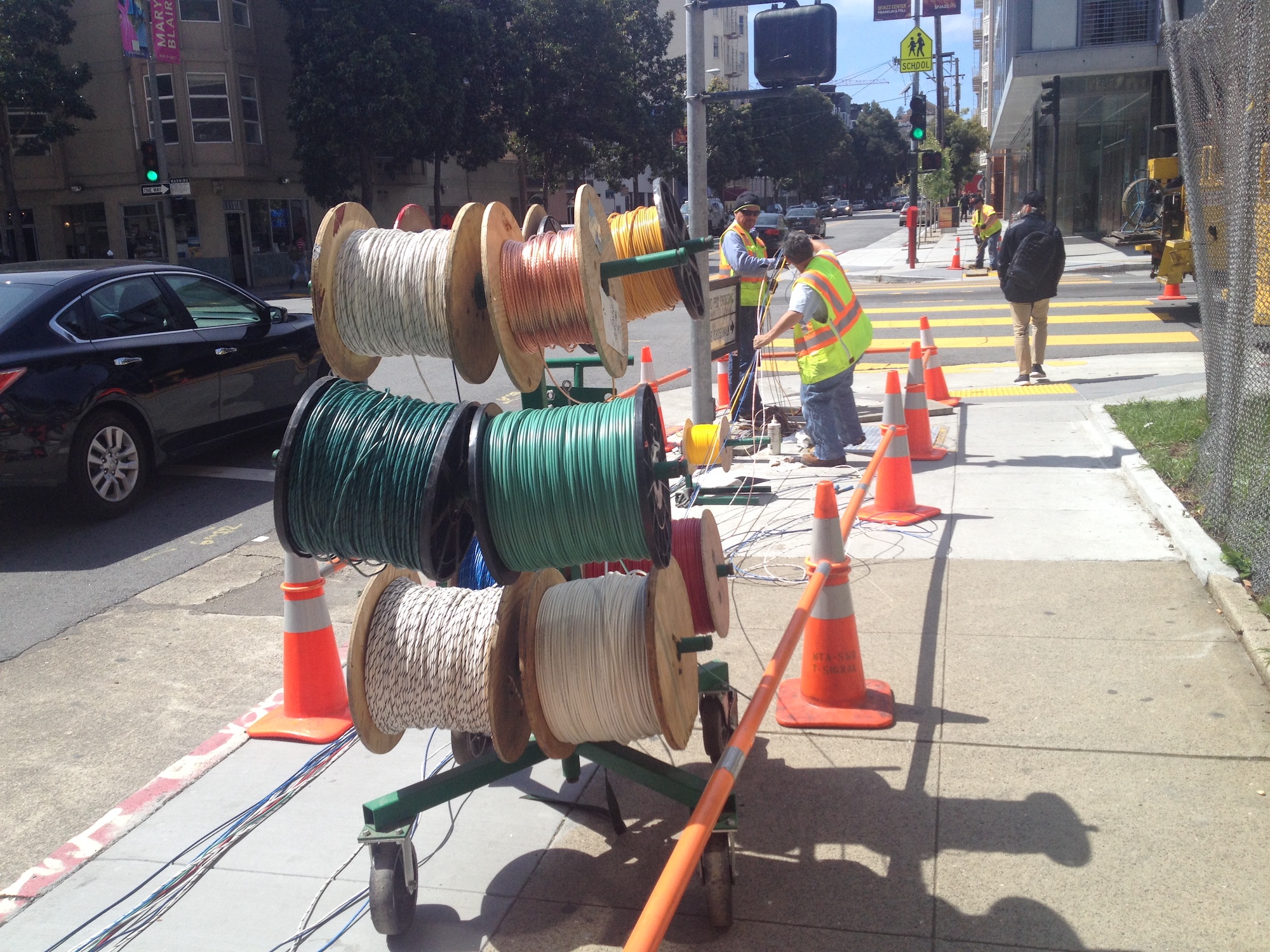 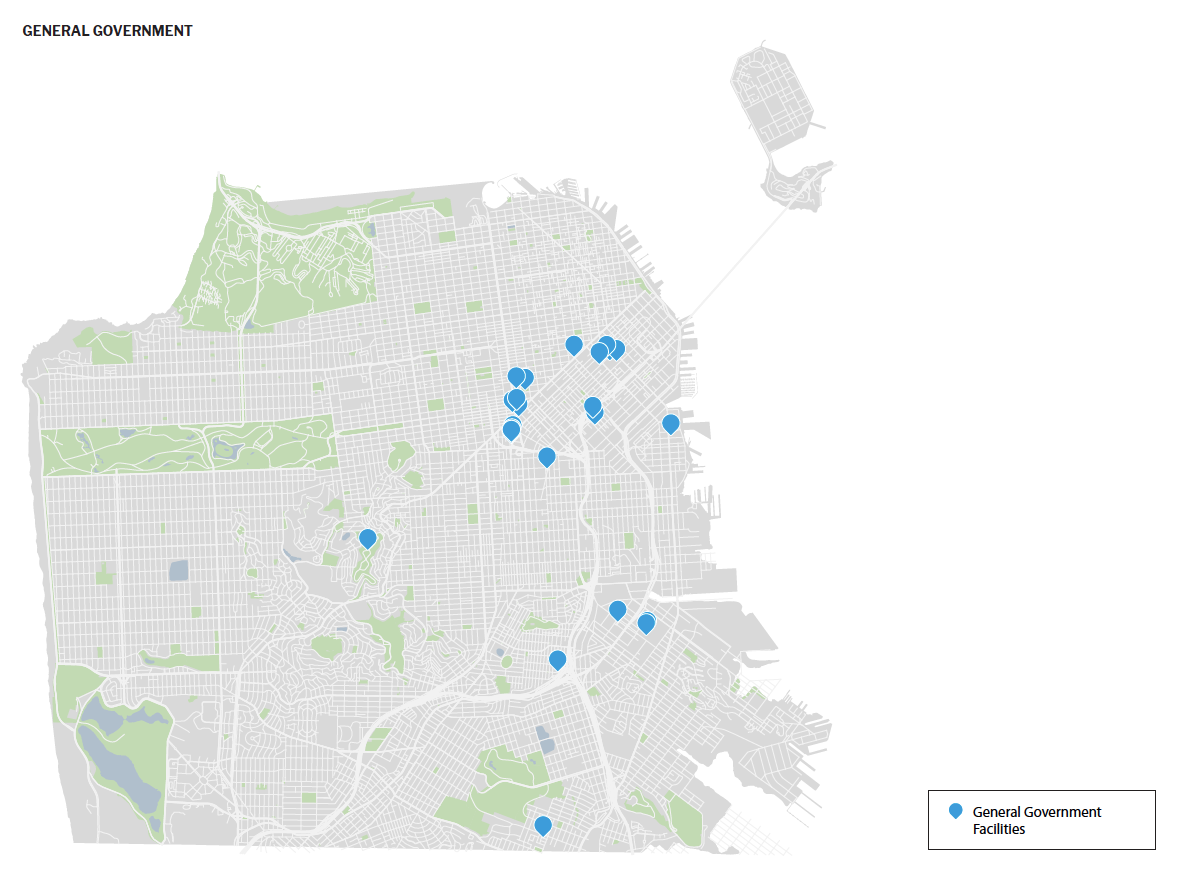 The General Services Agency delivers a wide range of capital-related services, including the maintenance and management of City-owned buildings, real estate, design and construction of capital improvements, capital planning, and technology services. These operations largely support the service delivery efforts of other City departments. Those with projects named in the 10-Year Capital Plan are described here.

The Real Estate Division (RED) within GSA manages over four million square feet of office space and other civic facilities that support the operations of city departments. RED is responsible for the acquisition of all real property required for City purposes, the sale of surplus real property owned by the City, and the leasing of property required by various City departments. Facility operations at the Alemany Farmers’ and Flea Markets, Yerba Buena Gardens, and the UN Gift Gallery at UN Plaza are also managed by RED. In addition to these responsibilities, RED provides property management services to City Hall, 1 South Van Ness Avenue, 25 Van Ness Avenue, 30 Van Ness Avenue, 1640- 1680 Mission Street, the Hall of Justice, and 555 7th Street.

One of the priorities for RED is the Civic Center real estate consolidation and reconfiguration effort known as “Project Chess.” Project Chess ultimately envisions a new City office building at 1500 Mission Street as part of a larger development. This project would allow for the consolidation of permitting services into a one-stop center, a similar consolidation of City HR functions, and the relocation of City staff throughout the Civic Center area into more efficient, cost-effective, resilient, and green office spaces. Upon completion the City would be able to terminate 100,000 square feet in leased premises while creating new transit-oriented development, office space, and opportunities for housing. The sales of City assets at 30 Van Ness, 1660 Mission, and 1680 Mission, are required to fund this project.

The Department of Technology (DT) is San Francisco’s information and technology services organization, providing leadership, policy direction, and technical support for technology and information solutions. DT has both internal and public-facing initiatives. The department manages City network operations and data centers. It also maintains the City’s fiber optics network, radio system, digital security, and other vital systems. DT serves the public through efforts like the development of a centralized online business portal, the delivery of SFGovTV, and the City’s Connectivity Plan, which aims to connect every City building to its fiber network and offer free, wireless internet service to more parts of San Francisco.

In addition to these critical support services of built and digital infrastructure, GSA’s umbrella includes the emergency response services delivered through the department of Animal Care and Control (ACC). ACC administers an open-admission animal shelter, providing housing, care, and medical treatment to wild, exotic, domestic, stray, lost, abandoned, sick, injured, and surrendered animals. ACC’s doors are open to all animals in need regardless of species, medical, or behavioral condition. ACC is also the first responder for animals in natural disasters and emergencies.

The City-owned Moscone Convention Center draws over one million attendees and exhibitors per year and is responsible for 21% of San Francisco’s travel and tourism industry. Moscone’s footprint includes over 700,000 square feet of exhibit space, 106 meeting rooms, and nearly 123,000 square feet of prefunction lobbies, but more space is required to keep up with demand and stay competitive nationally. Architects Skidmore, Owings + Merrill have designed an expansion project, currently underway with expected completion in 2018.

Working to ensure accessibility for projects from all of these GSA agencies and all City departments is the Mayor’s Office on Disability (MOD). The mission of MOD is to ensure that every program, service, benefit, activity, and facility operated or funded by the City is fully accessible to and useable by people with disabilities. Regarding physical access specifically, MOD’s Architectural Access Program has overseen the implementation of the highest-priority projects in the City’s ADA Transition Plans for facilities and right-of-way barrier removals.