Addressing the capital needs of the City’s public safety departments is one of the primary challenges of the Capital Plan. As the City works towards a more progressive justice system, there is an obligation to maintain the infrastructure that enable departments to do their jobs safely day in and day out. To ensure the security and well-being of San Francisco’s visitors and residents, including those in custody, the City must devote resources to provide humane and resilient facilities for our public safety agencies. 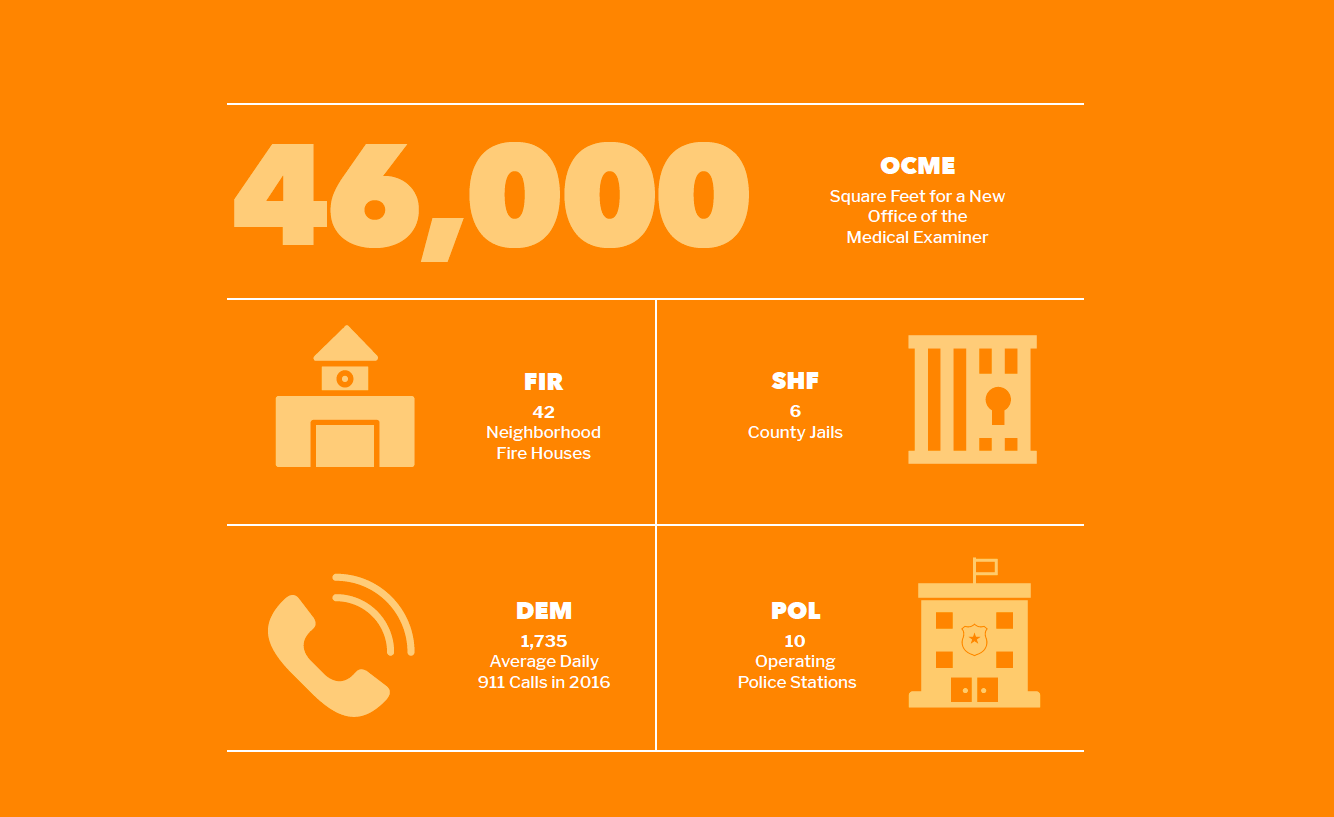 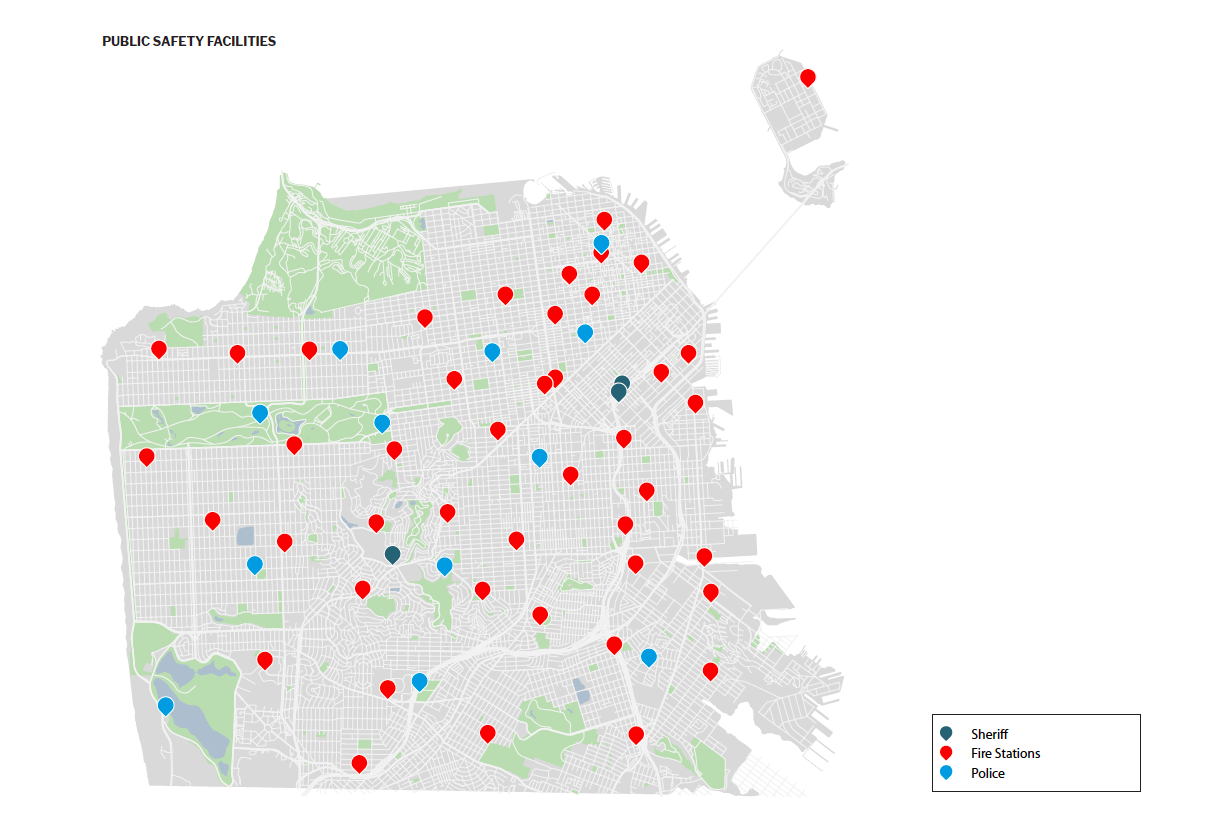 Since 2010, the voters of San Francisco have enthusiastically supported the Earthquake Safety and Emergency Response (ESER) General Obligation Bond Program at the ballot box. That program has provided funding for essential public safety projects large and small, from a new public safety headquarters to focused scope projects in neighborhood fire and district police stations. The ESER Program is projected to continue in the Plan, with measures planned for elections in 2020 and 2026. Planning work in FY2018 and FY2019 will be needed to ensure ESER 2020 projects are shovel-ready at first issuance. The City will aim to prioritize projects that address the greatest seismic and related structural and non-structural risks in the publicly owned capital portfolio as shown in the recently completed HAZUS analysis discussed in Chapter Four: Building Our Future.

The Justice Facilities Improvement Program (JFIP) was originally developed in 2008 to initiate the closure of the Hall of Justice (the Hall or HOJ) and the construction of replacement spaces for that facility. The HOJ stands seven stories tall and was originally built in 1958. It contains the County courthouse, office space for various justice-related staff, and two County jails. The jails on its two top floors (County Jails #3 and #4) were built on an antiquated model of corrections with linear jails and limited program space. This linear model creates limited visibility of prisoners, leaving them vulnerable to assault and self-harm. A major earthquake is likely to generate significant damage to the building and render it unusable.

Space considerations for JFIP include both the custodial and administrative uses of the Hall. County Jail #3 is closed, but County Jail #4 remains open, with approximately 400 prisoners in the building 24 hours a day. The District Attorney’s Office, SFPD Investigations Unit, Sheriff's Department, and the Adult Probation Department all occupy office space in the Hall. In addition the kitchen, laundry, and some of the building’s core subsystems support operations at the nearby County Jails #1 and #2. The last Capital Plan updated JFIP to reflect current conditions and existing staff levels at the Hall and also at 555 7th Street, which houses the Public Defender’s Office.

The last Capital Plan identified a Rehabilitation and Detention Facility project that would have created replacement capacity for the prisoners in custody at the Hall. Construction of a replacement facility was prioritized so as to evacuate the Hall’s most vulnerable population, the prisoners, first. The City applied for an $80 million award of State financing and won, but in the face of tremendous community resistance and demands for overarching reform to the criminal justice system, the Board of Supervisors unanimously declined that award.

In the wake of that rejection of State funds, Board President London Breed convened the Work Group to Re- Envision the Jail Replacement Project. The Work Group was tasked with identifying strategies to reduce the jail population and strengthen prevention and treatment services to bring about the permanent closure of County Jails #3 and #4.

Co-chaired by the Sheriff, the Director of Public Health, and a leading community advocate, the Work Group was convened in public sessions from March through October 2016. During that time, Work Group membership and support staff gathered, analyzed, and discussed information about San Francisco’s criminal justice and behavioral health systems. An interim report was made to the Government Audit and Oversight Committee of the Board of Supervisors in December 2016, and a final report is expected in March 2017.

The primary result of the Work Group’s efforts was a set of prioritized strategies to address programmatic, policy, and facility needs. The construction of a replacement jail facility for the beds at the Hall was not prioritized by a majority of Work Group members, nor was a centralized Behavioral Health Justice Center that was proposed by the District Attorney’s Office. Prioritized strategies included investments in housing, expansion of community-based and Department of Public Health behavioral health treatment facilities, a reentry navigation center for justice-involved persons, renovations to County Jail #2 to accommodate a portion of the County Jail #4 population, and the creation of an interagency intake and discharge planning center in County Jail #1.

As City stakeholders plan the implementation of efforts to close the HOJ permanently, San Francisco intends to honor the input of the Work Group to pursue non-incarcerating strategies to reduce the jail population. For example, the City plans to implement the Law Enforcement Assisted Diversion (LEAD) program based on the successful model from Seattle. It will also add capacity to Hummingbird Place, which provides a safe environment in a health treatment setting for those that need mental health support staving off a crisis. The Co-Chairs, Mayor’s Office, and elected officials will factor the prioritized strategies into upcoming decisions and planning efforts, including this Capital Plan.

The Plan has slated two HOJ-related projects in the COP Program, both with first issuance in FY2021: one for administrative staff relocation (either lease-to-own or construction), and one for prisoner exit. Planning work to find a solution that will permanently close the Hall of Justice jails will be needed in the years leading up to the planned first issuance for the Prisoner Exit project.

In recent weeks, conditions at the Hall have worsened dramatically, compounding the facility's already critical problems and hastening the need to vacate the building. Beyond the known seismic risk, subsystems including plumbing and elevators, have repeatedly failed and require substantial investment to repair. Rather than invest more than necessary in a facility ultimately unfit for occupation, in January 2017 the City Administrator declared the building’s City’s offices and jails should be shuttered as quickly as possible.

The target date for expedited exit from the Hall is 2019, the fastest possible to line up alternative locations for all staff and prisoners. City staff are exploring ways to meet this deadline; solutions may involve the allocation of General Fund Debt and/or Capital Planning Fund capacity to meet the cost of this ambitious schedule.

Should the expedited exit stall and/or the good-faith implementation of prioritized strategies from the Work Group fall short of reducing the jail population enough to be able to close the HOJ jails permanently, the City will need to make a difficult decision about what to do with the building's staff and prisoners.

San Francisco has historically been averse to the construction of new jail facilities. However, given the City’s responsibility for prisoners and staff, it will be necessary to relocate them from the Hall one way or another. The solution may require the construction of a scaled replacement facility and/ or operational changes such as out-of-county placements.

Meanwhile, the Sheriff's Department is proceeding with an application to the California Board of State and Community Corrections for financing that would support work at County Jail #2. The project scope includes needed repairs to the roof, HVAC system, and kitchen, hardening of dorms into cells to allow for some prisoners to move out of the Hall, and improvements for ADA code compliance. San Francisco intends to apply for the maximum large-county award of $70 million and has identified $12 million for the required match in the General Fund Debt Program.

As San Francisco’s population quickly grows and density increases, greater demand is placed on the City’s public safety agencies and their facilities. The San Francisco Fire Department, Police Department, and Sheriff’s Department have all taken a close look at needs across their respective portfolios, and they have identified significant needs throughout. The Juvenile Probation Department’s needs and facilities assessment is currently underway.

Working in partnership with San Francisco Public Works, these public safety agencies have identified repair and renewal needs to keep their existing facilities in a state of good repair. They have also identified some sizable gaps between the current portfolio and their projected operational needs in the years ahead. The departments are working actively with Public Works project managers, as well as Capital Planning and Mayor’s Budget Office staff, to prioritize projects, balance renewals and enhancements, and ensure that each agency’s operational needs are met.