The Health and Human Services Service Area includes a broad range of facilities that provide direct public health and social services to many of San Francisco’s most vulnerable residents, including individuals and families experiencing homelessness. Providing innovative and compassionate health care, delivering safety net services, and creating and preserving housing for families and residents at every income level are top priorities for the City. Our major medical campuses, neighborhood clinics, homeless shelters, children’s resource centers, supportive housing sites, Navigation Centers, and associated administrative space all play a part in providing these essential services. 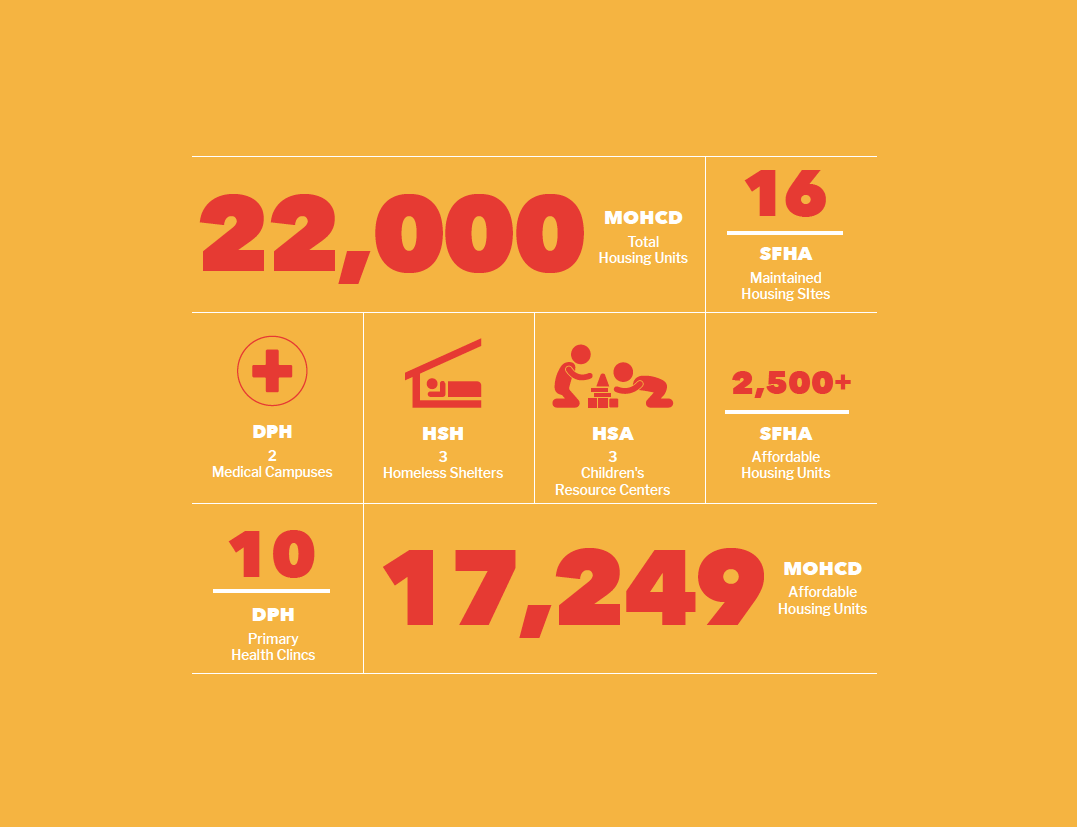 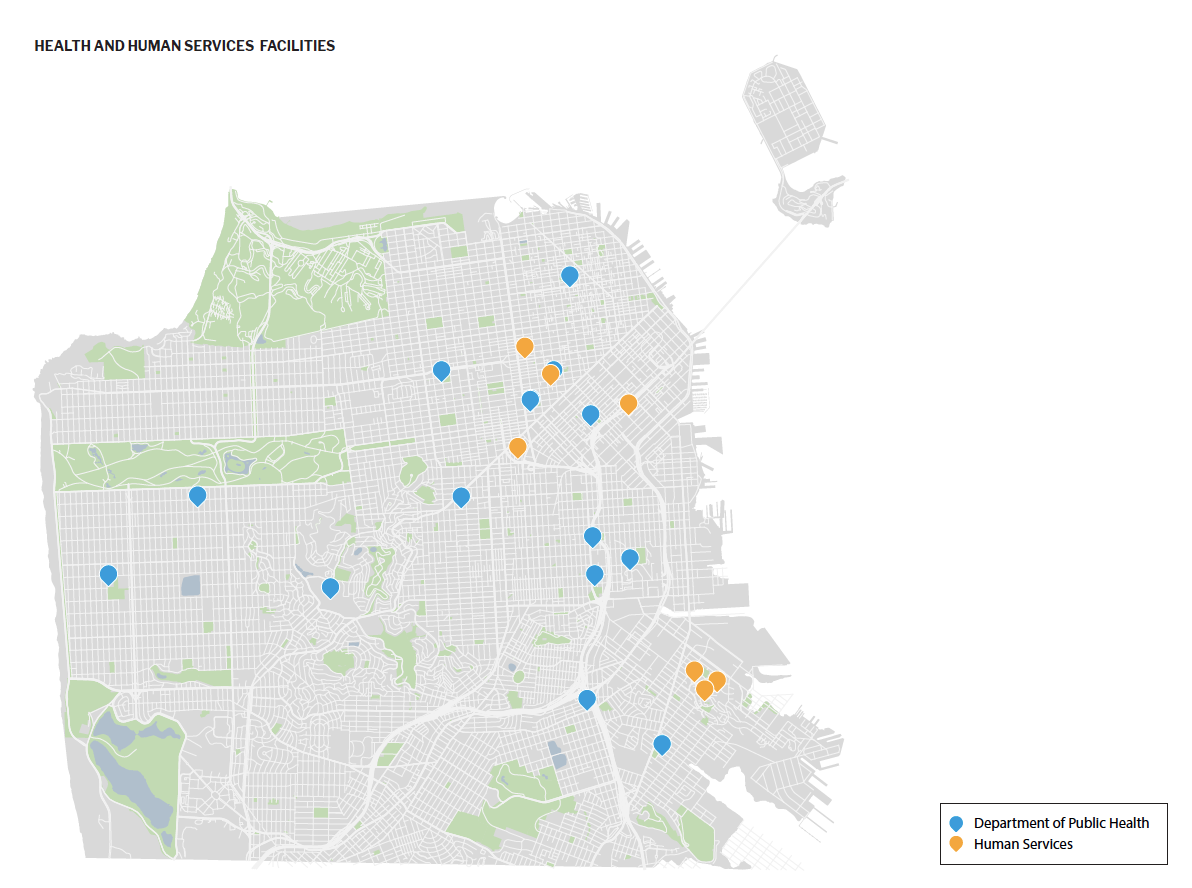 San Francisco’s health and human services agencies provide high-quality, culturally sensitive services to many of the city’s most vulnerable residents.

The San Francisco Department of Public Health’s mission is to protect and promote the health of all San Franciscans, and the department’s hospitals, clinics, and administrative offices all contribute to the success of that mission. DPH’s organization falls into two divisions, the San Francisco Health Network, which provides direct health services to insured and uninsured residents, and the Population Health Division, which addresses public health concerns including consumer safety and health promotion. The department’s central administrative functions support the work of both divisions and promote integration.

With the completion of the Zuckerberg San Francisco General Hospital and Trauma Center (ZSFG) in 2015, DPH will focus on the renovation of existing hospital campus buildings and community-based clinics, as well as the relocation of staff from the seismically vulnerable building at 101 Grove Street. The 2016 Public Health and Safety G.O. Bond will fund the seismic strengthening of Building 5 at the ZSFG campus, as well as improvements at Southeast, Castro- Mission, Maxine Hall, and Chinatown Health Centers. In 2016 DPH completed master planning efforts to move staff out of 101 Grove. This effort will be funded through the General Fund Debt Program. The proposed solution involves relocating some staff to Buildings 5 and 9 on the ZSFG campus, others to finger buildings on the Laguna Honda Campus, and the rest to a combination of City-owned and leased properties in and around Civic Center.

San Francisco has two human services departments: the Human Services Agency (HSA) and the newly formed Department of Homelessness and Supportive Housing (HSH). Through assistance and supportive services programs, HSA promotes wellbeing and self-sufficiency among individuals, families, and communities for San Francisco residents. HSA is also responsible for three homeless shelter facilities and three child care center facilities. These shelters are expected to be transferred to HSH beginning in 2018 to help San Francisco’s homeless population permanently exit the streets. With a mandate to end homelessness for at least 8,000 people by 2020, HSH is currently engaged in a rigorous strategic planning process that will guide capital and operating efforts in the years ahead. Among HSH’s known capital priorities are improvements to the existing shelter facilities and the expansion of the Navigation Center program.

The November 2016 election saw the loss of Proposition K, a proposed three-quarter-cent sales tax increase that would have generated around $50 million annually for homeless services. Addressing San Francisco’s homeless crisis remains a top priority, however, and the City has identified sources that can be redirected towards HSH priorities. These funds will complement the $20 million already approved by voters for homeless service sites in the 2016 Public Health & Safety G.O. Bond.

The responsibilities of San Francisco’s housing agencies have been evolving in recent years. In 2012 staff from the City and the San Francisco Housing Authority (SFHA), along with representatives of 72 different community organizations, met over a four-month period to re-envision the roles and responsibilities of SFHA. One of the primary goals of that process was addressing the $270 million backlog of deferred maintenance needs in the public housing stock. The resulting strategy addressed critical immediate and long-term rehabilitation needs while preserving affordability and improving conditions for very low-income residents.

As part of this strategy, SFHA set out to convert the majority of the its public housing units to private, non-profit-led ownership and management to enable the use of tax credits as a funding source for these properties. The conversion program is funded through the US Department of Housing and Urban Development’s (HUD) Rental Assistance Demonstration (RAD) program as well as a combination of other sources including but not limited to: HUD rental subsidies, Mayor’s Office of Housing and Community Development (MOHCD) funding, low-income housing tax credits, tax-exempt bond financing through the California Debt Limit Allocation Committee, long-term ground leases from SFHA, and seller carry-back financing. SFHA will continue to ensure compliance with eligibility and other programmatic requirements at these sites, but the management of the facilities will no longer be SFHA’s responsibility. It is expected that 4,575 housing units, including those at HOPE SF sites, will be converted through this process, leaving approximately 1,460 public housing units along with partnership interests in HOPE VI sites in the SFHA portfolio.

The mission of MOHCD is to coordinate the City’s housing policy; provide financing for the development, rehabilitation, and purchase of affordable housing in San Francisco; and strengthen the social, physical, and economic infrastructure of San Francisco's low-income neighborhoods and communities in need. MOHCD administers the HOPE SF initiative and the RAD program, and it also manages the funding available through the 2015 Affordable Housing General Obligation Bond and the Housing Trust Fund. Additionally, MOHCD serves as the Successor Housing Agency, responsible for all former San Francisco Redevelopment Agency affordable housing assets.

RAD is a HUD program for the voluntary, permanent conversion of public housing to Section 8 housing. San Francisco was an early adopter of this program and is the largest RAD conversion site in the country. Unlike public housing properties, converted properties are eligible for low-income tax credits, a more reliable and adequate source of funds to support the capital needs of these facilities. RAD funds are used for both HOPE SF developments and for gut rehabilitations on smaller properties throughout the city.

Public Housing: Affordable to households with incomes of up to 80%, and rent is set at 30% of income

Section 18: HUD disposition program that allows the conversion of properties found to be economically or functionally obsolete to mixed finance developments

Tenant Protection Vouchers: Vouchers available through HUD and issued directly to eligible tenants to ensure that a Section 18 disposition does not harm existing residents in a property slated for disposition

Workforce Units: Available to households earning roughly between 60% and 120% AMI but priced below market, typically part of Inclusionary Units