The booming Bay Area economy and the support of the Mayor, Board of Supervisors, and citizens of San Francisco have given rise to historic levels of capital investment in recent years. As a result, San Francisco is better positioned to build a health and well-balanced infrastructure program for future generations. However, there are challenges ahead. A potential economic slowdown or downturn looms. The age of the City’s infrastructure, combined with the large population growth in formerly industrial areas, some large replacement projects, persistent construction cost escalation, and rising sea levels all translate into substantial demands on the City’s limited resources.

The Plan recommends a record level of funding at $35 billion over 10 years. Despite this, the Plan defers $4.6 billion in identified needs for General Fund departments and does not fully fund annual state of good repair needs until FY2032, assuming recommended Pay- As-You-Go program funding levels, as shown in Chart 2.1. With this in mind, it is important that the City strive to take advantage of current economic conditions to achieve or exceed the recommendations of this Plan.

Years of historic underinvestment in the City’s capital program has resulted in a current backlog of $472 million for streets and General Fund facilities. In prior versions of the Capital Plan, the definition of current backlog was limited to deferred maintenance and did not include immediate renewal needs that could not be funded in the first year of the Plan. In the current Plan, the backlog is defined as the difference between the total current renewal need and the portion of this need that is funded in the first year of the Plan. The total current renewal need includes both items identified by departments as deferred maintenance, as well as first-year renewal needs. The new definition of backlog used in the current Plan more accurately captures the full picture of immediate renewal needs. 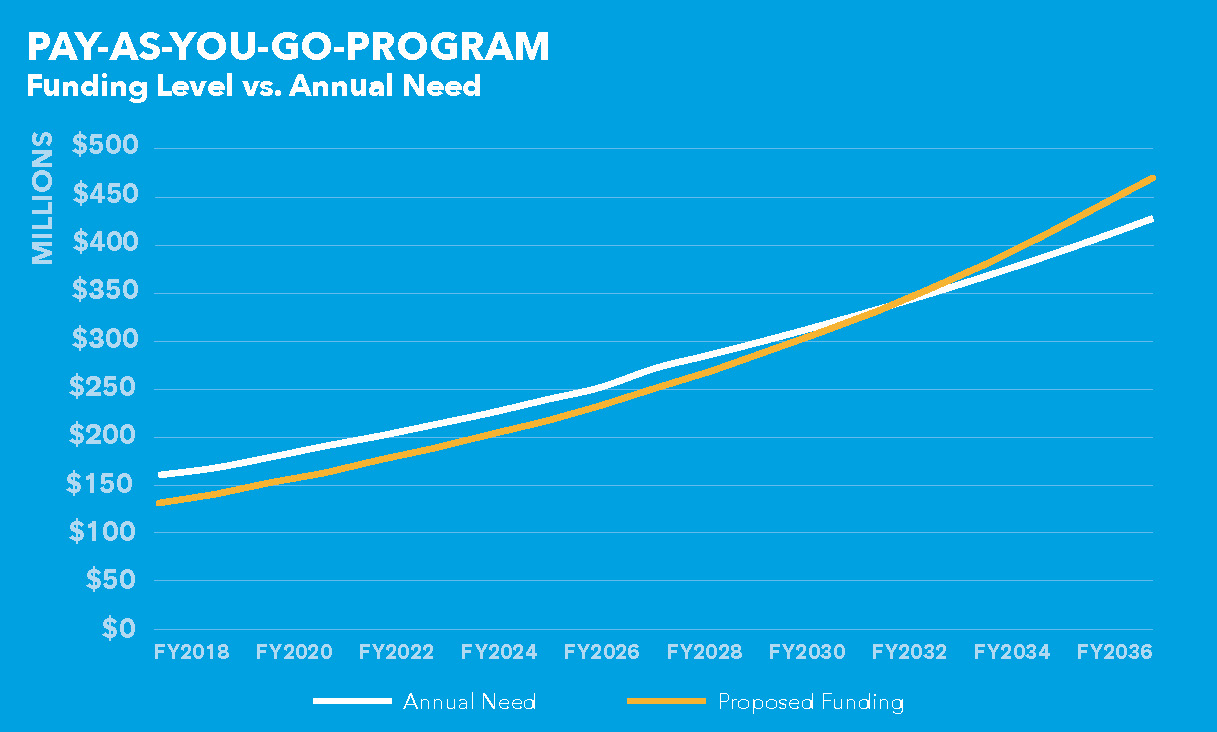 Under this Plan, even if the City meets the Plan’s funding recommendations, the existing backlog is still projected to increase 191% to approximately $1.4 billion by FY2027, as shown in Chart 2.2. This expected increase is the result of needs accumulated during low spending periods and projected cost escalation of today’s backlog. To address the gap, the City continues to investigate different approaches, including revising funding benchmarks, leveraging the value of City-owned assets for debt financing, preparing projects for voter consideration at the ballot, forming public-private partnerships, and exploring new revenue sources.

In addition to the formidable backlog, there are a number of other issues that the City will face with regard to our capital program, and the associated risks will have to be managed.

New construction in the formerly industrial eastern reaches of the city continues to accelerate demand for and usage of transit, streets and other right-of-way infrastructure, and open spaces. San Francisco must accommodate that growth while balancing state-of-good-repair needs and absorbing greater operating and renewal costs.

Finally, San Francisco’s resilience mindset presents its own challenges. As a densely populated, aging city situated between two fault lines and surrounded by water on three sides, the threats of disaster and climate change raise serious safety concerns. At the same time, obstacles both physical and financial threaten the fabric of San Francisco’s communities. Without letting any one obstacle fade from focus, the City must balance our efforts on these fronts to keep all of them moving forward.

Aligning the capital budget with the Plan’s recommendations in the years to come will be challenging as competing needs persist and arise. However, San Francisco has taken many steps that demonstrate our commitment to carrying out the Capital Plan’s recommendations, including but not limited to: increasing the General Fund contribution within the capital budget, continuing “smart” General Obligation and General Fund Debt Programs that tackle critical needs, and developing strategies for addressing infrastructure demands associated with projected growth.

This Capital Plan puts forth a robust plan that balances maintaining current assets in a state of good repair with meeting San Francisco’s growing service and population needs. Though there are risks associated with rising construction costs, a substantial capital backlog, the scale of our resilience goals, and a potential economic slowdown or downturn, the City’s capital program is undoubtedly much better positioned than it was at the time of the first Capital Plan in 2006.